Gas monitoring in the world’s third largest mosque in Algiers

Posted in Application, Company, General, Products, Projects Tagged CO gas measurement, CO gas sensors, EN-50545-1, Fixed gas alarm systems, gas sensors, LPG gas measurement, NO2 gas measurement
330 gas sensors from MSR-Electronic protect against gas hazards in an underground car park with 4,000 parking spaces. A fascinating sacred space opened in the Bay of Algiers at the end of 2020, the third largest mosque in the world after Mecca and Medina. The invited international competition for the architectural design with 17 participants as well as the construction management was won by the German architectural office KSP Engel. The significance of the project for the country was great. Only a few months after the competition decision, the contract was signed in the presence of the German Chancellor Angela Merkel. The mosque in Algiers is the third largest and thus will be one of the most important mosques in the world in the future.

In terms of figures: A base with underground parking for 4,000 vehicles forms the common ground. There is room for up to 36,000 people in the prayer hall – St Peter’s Basilica would fit inside – and 120,000 people in the entire complex. The minaret, 265 metres high, is the tallest minaret in the world and, on top of that, the tallest skyscraper in Africa.

The minaret moved away from the central axis is the first minaret in the world to resemble a modern hybrid skyscraper and houses a museum for Islamic culture with a research centre, office areas and a sky lobby. There is also a viewing platform in the glazed spire.

An underground car park with triple gas monitoring.  Whether conventional petrol- and diesel-engined vehicles, electric cars or vehicles powered by LPG; the mosque’s parking garage is equipped with a complex gas warning system from MSR-Electronic. 330 gas sensors monitor the CO, NO2 and LPG concentration in the ambient air, thus ensuring people’s safety.

The Great Mosque of Algiers was also one of MSR-Electronic’s largest projects in 2020.

In underground garages, tunnels and parking halls, worldwide guidelines apply to monitor exhaust gases with gas sensors. In a 1st step, the ventilation system is ramped up, and if this does not sufficiently reduce the concentration of pollutants, optical and acoustic signalling devices warn in order to evacuate the room.

CO exhaust gases from petrol engines
Carbon monoxide forms during incomplete combustion of petrol. Its proportion is highest during the starting process of an engine. The gas is completely odourless and colourless. At the same time, CO is a highly toxic (poisonous) gas that is lethal even in small quantities. Put simply, the intake of CO hinders the oxygen supply; the transport of oxygen in the blood of the human body is massively impaired. Since humans do not have a sensory organ that protects them from this, suitable gas sensors are used for safe detection.

NO2 exhaust gases from diesel engines
Nitrogen oxide forms during the combustion of diesel. NO2 is a very strong respiratory poison, damages the mucous membranes and irritates the eyes. NO2 is responsible for coughing, bronchitis and even pulmonary oedema. Humans can detect NO2 through their sense of smell, as it smells similar to chlorine. But the concentration emitted by car exhausts is usually not sufficient to be perceived by the sense of smell. Here, too, a gas sensor must be used for reliable detection.

LPG
In fact, parking in an underground car park with a vehicle running on liquid petroleum gas – LPG – is, in the truest sense of the word, dangerous like fire. LPG is heavier than air and forms invisible lakes when it escapes from a tank. This means that there is a high risk of fire and explosion if someone only throws away a burning cigarette butt. But this is not the case when natural gas or hydrogen escapes. These gases are much lighter than air and quickly disappear through the ventilation.

Solutions from MSR-Electronic for reliable gas monitoring.   Gas detection systems must be reliable at any time. When gas leaks occur, fast alarms and reliable products are required. The sensors, controllers and warning devices from MSR-Electronic effectively protect people and systems in dangerous situations when combustible or toxic gases escape. 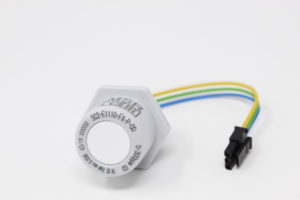 MSR gas sensors are integrated into complex warning systems and are used i.a. in garages, biogas plants, petrochemical industrial plants and laboratories. In addition to the sensor element and the measuring amplifier, the sensors contain a μController for processing the measured values. Thus, various data can be processed and utilised, such as the temperature for compensation of the measured value. Calibration interval and errors are also monitored and transmitted to the evaluation unit. Thanks to the X-Change technology, calibration can be carried out by simply exchanging the sensor head or by using the integrated, convenient calibration routine directly on the system. The sensors are designed for connection to the MSR controllers and boards.

You can find more information on gas measurement technology in underground garages here.

The entire support and installation of the MSR gas warning system in the Great Mosque of Algiers was carried out by the MSR partner Daman Tech Safety & Security Technologies. The gas warning system complies with EN 50545, VDI 2053 and EMC Directive 2014/30/EU.

Further information on MSR products can be found here in the current MSR-Electronic online catalog or in the webshop: www.msr-24.com.

MSR-Electronic is a manufacturer of fixed gas warning systems with decades of experience in the field of building automation and gas measurement technology. The international company with headquarters in Germany has a wide range of methods for the detection of toxic and combustible gases. On this basis MSR-Electronic develops individual gas sensors, controllers and warning devices for many applications, such as parking garages, tunnels, petrochemical industry or shipping. The products meet more than the general standards and regulations and can therefore guarantee the safety of the plant.  If you have any questions please send us an email or give us a call. www.msr-electronic.de/en/